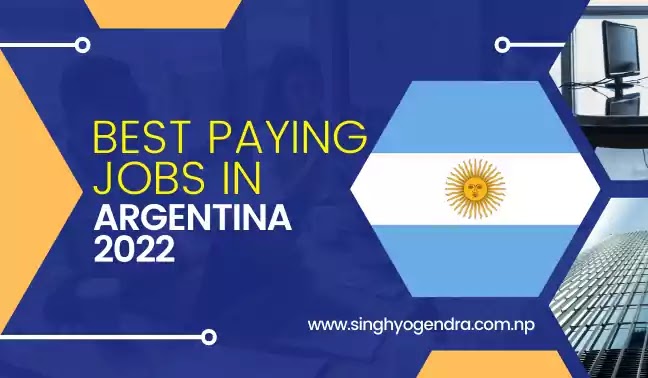 1. Surgeons / Doctors
Salary Range: from 90,700 ARS to 254,000 ARS
Because of the crucial nature of their work, surgeons are among the highest-paid professionals. A surgeon's job has a high level of danger and necessitates vast knowledge and a long learning curve, all of which are prerequisites for a high-paying career.


2. Judges
Salary Range: from 76,200 ARS to 213,000 ARS
Because of the enormous duties that come with the position of a judge, they are paid well. Choosing people's futures is a difficult undertaking, and the hefty pay is entirely warranted.


3. Lawyers
Salary Range: from  61,700 ARS to 173,000 ARS
Lawyers' high perceived worth in the eyes of their clients is the primary basis for their high pay. A good lawyer may save/earn you a lot of money or even keep you from facing the death penalty.


4. Bank Managers
Salary Range: from 58,100 ARS to 162,000 ARS
Being in control of hundreds of millions of dollars in funds and investments, along with all the hazards that come with it, makes managing a bank an incredibly important job that deserves a high compensation.


5. Chief Executive Officers
Salary Range: from 54,400 ARS to 152,000 ARS
CEOs are know at least for an organization's success or failure. The enormous extent of their influence, as well as the hazards involved, account for their large salary.


6. Chief Financial Officers
Salary Range: from 50,800 ARS to 142,000 ARS
Any career that involves handling money is immediately considered high-paying. Budgets, expenditures, expenses, and income are all managed by CFOs, and they have a direct influence on the organization's operations.


7. Orthodontists
Salary Range: from 49,000 ARS to 137,000 ARS
Orthodontists work in a sector where consumers are prepared to pay a premium price for a service, making them one of the highest-paying occupations.


8. College Professors
Salary Range: from 43,500 ARS to 122,000 ARS
Professors in colleges and universities are among the highest-paid and most respected professions. It takes a lot of hard work and perseverance to become a professor, which is one of the reasons they make so much money.


9. Pilots
Salary Range: from 36,300 ARS to 101,000 ARS
Despite the fact that pilots go through difficult training programs and are responsible for the safety of thousands of people every day, they are perhaps the only occupation on the list that includes some kind of thrill.


10. Marketing Directors
Salary Range: from 32,700 ARS to 91,300 ARS
Marketing directors are in charge of growing their companies' income. They are directly accountable for creating revenue and are handsomely compensated as a result.
Next Post Previous Post
No Comment
Add Comment
comment url
Best Paying Jobs 2022