Class 11 English: Summary of The Wish by Roald Dahl Class

Roald Dahl, an English writer, wrote this short tale called "The Wish." This narrative is entirely based on the main character's imagination. 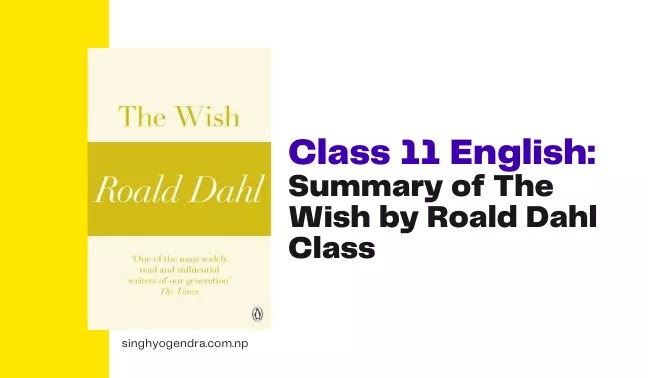 
Readers are confused by the term "The Wish." After successfully navigating the red carpet and entering the venue, the main character had hoped to receive a puppy for his birthday. However, in Birthday, the child stumbles in a black area on the carpet and loses his imaginary game, putting an end to his search for the puppy.

Main Summary:
In the very first scene, we see a nameless child inspecting the scab on his kneecap. He was sitting alone on the stairwell of his front door. He had a dark scab on an old injury on his kneecap. He knelt down to study it more thoroughly.


After much deliberation, he chose to remove the scab from his incision. He delicately picked off his scab with his nail and placed it on his thigh. He stroked the circle of his wound with his finger and flipped the scab.


The scab landed on the red carpet's border. Different colors of the carpet drew his eye as he walked closer to the scab. In those carpet colors, he imagined a variety of things. Using the many colors of the carpet, he devised a game strategy. In his imagination, the reddish dots resembled a mass of embers that could burn him. The black patches on the ground were deadly snakes that could bite him and kill him. The yellow patches were just safe zones for him to step inside and cross the massive carpet to get inside. He'd be given a puppy for his birthday if he could just get inside.


To achieve his goal, the boy imagined a really difficult and dreadful game plan (The Wish of completing his game and getting a puppy). In his imagined game, the boy began to progress. He walked forward, only stepping on the yellow spots. He continued on his way, carefully stepping into the safe zone (Yellow colour).


He began to wobble as he approached the halfway point. Waving his arms helped him maintain his equilibrium. He didn't take the required precautions. He began to feel panicked because he couldn't turn around due to his body position. He was terrified of the dark patches (Poisonous Snakes) ahead of him.


He stayed for a long time in the yellow safe zone. He paused and considered his options for moving forward. He was forced to keep going because he was afraid of not receiving the puppy. He made good use of his wits, hesitated, and took a cautious step forward.


The child had to make a selection only a step ahead of the midway point. He had to decide whether he wanted to move to the left or right.


On the yellow spot, he took his next step. He accidentally touched the dark area, which was only a centimeter away. He was terrified because he was about to be bitten by a snake. His good fortune, on the other hand, saved him.


He had the choice to pick once more. He could have gone right, but he chose to walk left due to his dread of black deadly snakes.


He went on with his journey. His following move was a long one. He made the decision to take it carefully. When he jumped ahead, though, his feet landed on the wide spots. He attempted but failed to return. He tried but failed to move his entire weight to his front foot. He was firmly imprisoned.


The snakes began to move about beneath his feet. He began to wobble as a result of his anxiety. He tried flailing his arms to balance himself, but it didn't work. Slowly, he began to sink into the darkness. As he touched the black, he let out a loud scream. His mother was hunting for him outside in the sunshine, well behind the house.