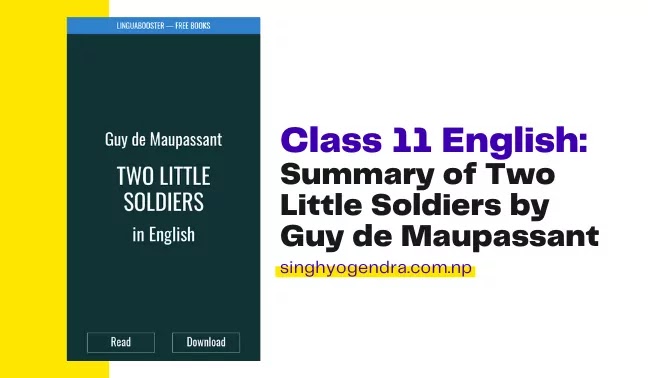 The short tale "Two Little Soldiers" is a triangle love story written by Guy de Maupassant, a French writer. The plot revolves around a strange triangular love triangle that ends in a very unexpected way. This narrative demonstrates how friendship and passionate love may coexist with change, dissatisfaction, conflict, betrayal, and jealousy. The location of this narrative is Courbevoie, a town in the French countryside on the outskirts of Paris. Luc Le Ganidec and Jean Kerderen, two French soldiers, are the major protagonists in this novel.

WEEKEND OF THE CHARACTERS
Luc Le Ganidec and Jean Kerderen were both soldiers who were close friends. Jean Kerderen was the quietest and most reserved of the group, whilst Luc Le Ganidec was the most freewheeling and open-minded. Both of them spent their Sunday vacations away from their barracks in the countryside. They spent their vacation in a little wood towards the end of Bezons. They used to travel so quickly without stopping to talk on their way to Bezons.


They would pause for a few moments at Bezons' bridge to take in the view of the Seine River and its white flowing sails. They would lean over the bridge's railing to take in the view of the river. They were reminded of their homes by this river. After crossing the bridge, they would purchase vital necessities such as bread, wine, and other items from businesses. Finally, after passing through the settlement, they came to a little woodland that reminded them of their country, Plounivon. Both of them would benefit much from being in that tranquil area, away from the city's commotion.

A YOUNG MILKMAID'S ENTRY:
One day, both soldiers encountered a young milkmaid who was sending her cow to the pastor to be milked. The milkmaid approached the pastor with her cow the next Sunday and spoke with them. She shared her milk with her coeds when she returned. They discussed numerous topics once again. She agreed to meet them both the next Sunday.


The next weekend, Jean Kerderen suggested to Luc Le Ganidec that they give the milkmaid a present. Both of them came to a decision and purchased bonbons for her. They were hesitant to inform her about the present when they saw her the following Sunday.


Finally, Luc Le Ganidec informed her of the gift, and Jean Kerderen presented her with a bonbon. Receiving chocolates from the soldiers made her very pleased. The milkmaid became a topic of talk for both troops in the barracks as the weeks passed. They used to talk about her all the time. After a few more encounters, these three people became close friends. In addition, the milkmaid began bringing breakfast things to their meetings.


LUC LE GANIDEC'S DECEPTIVE MOVEMENT:
Luc Le Ganidec began leaving the barracks on a regular basis. On Tuesday, he left the barracks and returned quite late. On Friday, he fled the barracks once more. He borrowed money from Jean Kerderen but never explained why he was on leave. He would leave the barracks for many hours during the day and return to the barracks at night. Luc's actions outside the barracks were unknown to Jean.

JEALOUSY AND HEARTBROKEN STATE OF JEAN KERDEREN:
When the girl and her cow returned the next Sunday, she was overjoyed to see Luc Le Ganidec. She dashed over to Luc Le Ganidec and hugged him. She kissed and embraced Luc Le Ganidec. She was unconcerned about Jean Kerderen. Both Luc Le Ganidec and the milkmaid vanished for a long time in the woods. Jean Kerderen got frantic as she sat alone. Nothing about their actions made sense to him. His heart was crushed. He became aware of his feelings for the girl. He even grasped the reason for Luc's long absences from the barracks. He thought he was an idiot. Both lovers kissed again when they returned. Jean didn't even get milk that day from the milkmaid.

JEAN KERDEREN'S BAD LUCK:
Jean was disappointed when she returned to the barracks. When they came to a halt just beyond the bridge, Jean Kerderen leaned heavily over the railing, her face solemn. In desperation, he couldn't balance his body over the railing. He unexpectedly fell into the river. Luc Le Ganidec shouted for assistance, but no one responded. Jean's head was the last thing he saw. Following then, Jean's body vanished into the ocean. His corpse was discovered by boatmen later that day. Luc Le Ganidec was frightened and unhappy when he learned about Jean's mishap at his barracks.