Class 11 English: Summary of Civil Peace by Chinua Achebe - This realistic short story "Civil Peace" has been written by a Nigerian Writer Chinua 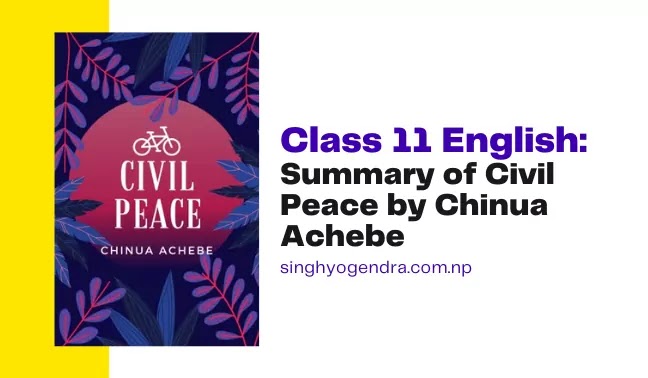 Chinua Achebe, a Nigerian writer, wrote this realistic short tale called "Civil Peace." The impacts of the Nigerian Civil War on the people were shown in this narrative, as well as the subsequent 'Civil Peace.' After the Nigerian Civil War, this narrative depicted the setting of Civil Peace in Eastern Nigeria (1967-1970). The civil war in Nigeria lasted three years. During those years, approximately a billion people perished from famine.

This is a short narrative about a Nigerian family living in Enugu, Nigeria's easternmost city. The Nigerian Civil War has wreaked havoc on their household. Jonathan Lwegbu, the protagonist of this narrative, is a positive person.


Main Summary:
The key character Jonathan Lwegbu regarded himself as extremely fortunate. His life's miracle was that he had emerged from the conflict with five incalculable blessings. He, Maria, and three of their four children were all still alive. In his household, all five heads were protected. His old bicycle, which he restored to working order after the war, was the next miracle in his life. When miracles occurred in his life, he would exclaim in awe, "Nothing confuses God." During the war, an army commander tried to commandeer his bicycle, and he almost lost it. Jonathan suspected the cop of taking a bribe in return for the bicycle because of his "particular lack of grasp and toughness in his demeanor." He was able to preserve his bicycle and give the police two pounds. He then dug up his bicycle and buried it. After digging his bicycle out of the earth, he began to use it as a taxi. He made £115 from his taxi business in just two weeks.


Jonathan then went to the capital city of Enugu in quest of his home. Even though other surrounding structures had been reduced to a pile of rubble by the conflict, he was shocked and happy to see his house still intact. He surveyed his home and came to the conclusion that it required some repairs. As a result, Jonathan gathered all of the materials he could find: zinc, wood, and cardboard. To finish the housekeeping, he hired a carpenter. He returned his family members to their house when the repairs were completed.


Following their settlement, the entire family worked diligently to gain money and rebuild their lives. Maria cooked Akara balls to sell in the neighborhood as the kids collected mangoes. Before the war, Jonathan worked in the mines. When Jonathan realized he wouldn't be able to reclaim his career as a coal miner, he built a bar for the troops, which he ran out of his house. Jonathan thanked God for providing him with family, a house, and a job.


Jonathan's family persevered in the face of adversity, and they even received a government bonus. In exchange for the Biafran money Nigerians gave over to the government's coffers, the government began handing out egg rashers payments of twenty pounds. Jonathan walked out of the office with cash in his pocket. On his way home, he was really concerned about the robbers. Jonathan got restless at home that evening and couldn't sleep till late. Finally, as he was sleeping, he was startled awake by a loud banging on the front door. He called out to see who was knocking, and the robbers responded.


Jonathan's family appealed to the police and neighbors for assistance, but no one responded. They eventually stopped calling. The robbers then yelled out, echoing the family's cries for assistance. Jonathan's family and he were terrified. Jonathan was moaning and the children and Maria were sobbing. The thief's commander came out again, mockingly asking whether he should call for reinforcements, but Jonathan told him not to. The thief's commander requested £100 in cash. They forbade Jonathan from entering his home. Jonathan informed them of his true situation. A salvo of automatic rifle fire ripped through the air as the voice faded. Maria and the children began to wail once again. They were advised not to cry by the leader. They only wanted money, and then they'd be gone.


Jonathan informed them of the funds he had received from the egg rasher. He even told them he didn't have £100 on him. He boasted about having a total of 20 pounds in his possession. The crooks agreed to take the money. The commander urged the thieves to shut quiet when they mentioned that he had more money and that they should go inside and check. Jonathan went to his locked box to grab the twenty pounds to present to the robbers. After taking the money from Jonathan via the window, the burglars walked away. The neighbors came over the next morning to sympathize with Jonathan, but his family was not at home. They had finished their task for the day. Jonathan told his sympathizers that the weight reduction was insignificant; he hadn't had the egg-rasher money for a week and didn't want to rely on it. Money, like so many other things in the battle, flowed effortlessly from his hands.