Class 11 English: Summary of An Astrologer's Day by RK Narayan

Class 11 English: Summary of An Astrologer's Day by RK Narayan 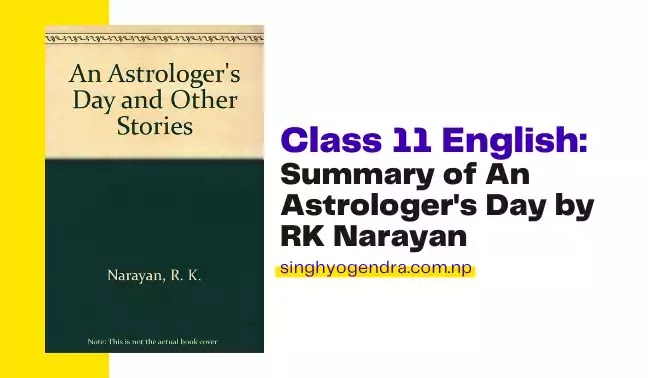 An Astrologer's Day by RK Narayan Summary and Main Theme & Events
R.K. Narayan, an Indian writer, wrote this short story called "Astrologer's Day." "An Astrologer's Day" is a suspenseful thriller that depicts a day in the life of an average yet deceptive astrologer. The primary character in this narrative is an anonymous astrologer. He makes a living by prophesying or selling cosmic insights to naive peasants, despite the fact that he has no knowledge of the universe or true spiritual insights. This narrative depicted a common astrologer circumstance in which he is confronted with his prior life's story. Through his right use of intellect, he has been successful in saving his life.

Various issues linked to human character are explored in this novel, including hypocrisy, shrewdness, revengeful nature, and selfishness.


DESCRIPTION OF THE ASTROLOGER AND HIS BUSINESS:
According to the author, the astrologer always started his astrological business in the middle of the day. On the Town Hall road, he used to sit and do his business under a tamarind tree. That route went to Town Hall Park, which was ideal for attracting clients to his shop. The route was densely packed with individuals of all crafts and professions. He used to sit next to the groundnut vendor. The astrologer was able to conduct his business even after the dusk thanks to the groundnut vendor's gaslight. The astrologer was an expert at deciphering human behavior and psychology.

He enclosed his astrological business with numerous preparations when he launched it in the middle of the day. He removed his professional instruments from his luggage, including a square cloth piece, cowries shells, maps, Palmyra: writings, and so on. In order to attract customers, he disguised up as an astrologer. On his forehead, he applied holy ash and vermilion. His forehead appeared to be fairly brilliant due to his cosmetics. On his head, he wore a saffron turban. As a result, the astrologer portrayed himself in the best possible light to entice his clients.


The astrologer was a clever individual who knew very little about astrology. To please his consumers, he just made educated guesses. He claims he fled his village because he did not want to follow his forefathers' customary vocation of farming. He had no intention of returning to his hometown. He had to put in a lot of effort to earn his money by using his sharp mind. In the evenings, he handed his daytime earnings to his wife.


MAIN EVENT IN THE STORY:
When a groundnut vendor's gaslight went out, the astrologer decided to close his store as well. He noticed a man standing in front of him while packing up his professional gear. He mistook the man for a potential consumer. The man challenged the astrologer and his astrological expertise when he was invited. The astrologer and the guy made a wager. He gave the astrologer an anna and requested a suitable answer to his inquiry. He even threatened to return his anna with interest if he didn't respond appropriately. The astrologer denied charging three pies for each response to a query. He asked a fee of five rupees for a favorable response. But, in the end, he requested eight annas in exchange for a decent response. The man became willing to make amends. However, he imposed a condition in front of the astrologer. He claimed that if the astrologer successfully answered his query, he would give him eight annas. However, if he did not please him with his response, he would be required to refund double the amount, i.e. sixteen annas. The wager had been made. The astrologer said a prayer to God. The astrologer caught a glimpse of the man's face as he lighted up his cheroot. He declined the challenge and requested that the man release him. However, the man gripped his wrist tightly. Fear gripped the astrologer. He reluctantly accepted the task. The astrologer began to tell him about the woman, but the guy interrupted him because he was dissatisfied. The man just had one doubt: would he be able to find what he was looking for? The guy assured the astrologer that if he got an acceptable response, he would pay him a rupee. Before responding, the astrologer recited a few incantations.
The astrologer disclosed the occurrence that happened to the man in the past. According to him, the victim was assaulted with a knife on his chest by an unknown individual. Hearing the words of the astrologer enthralled the man. He had previously been stabbed with a knife. He was injured and was tossed into a neighboring well to die. He was spotted and saved by a bystander. The man wanted to learn the details about the perpetrator from the astrologer so that he might exact vengeance. However, the astrologer notified them of the perpetrator's death four months earlier in a distant town. The man was dissatisfied when he learned about this. Guru Nayak was the name of the guy who came before him, according to the astrologer. He explained to the man that his hamlet was in the north and that it took two days to get there. He advised him to return home and to avoid traveling south in the future. He requested that he return to his homeland right away. He warned the man that if he left his house again, he would be in danger. The man was curious about the cause of the criminal's death. The astrologer assuaged his fears by informing him that the perpetrator had been crushed under a vehicle. After handing the astrologer a fistful of money, the man walked away. Likewise, the astrologer packed his bags and returned home.

The astrologer arrived late at home. His wife was concerned about his well-being. To count the money, the astrologer tossed them at his wife. There were twelve and a half annas in all. She was overjoyed to see that sum. She had intended to get jaggery and coconut for their toddler, who had been requesting sweets for quite some time. The astrologer, on the other hand, appeared concerned and was not as cheerful as his wife. He was furious with Guru Nayak, who promised him a rupee but only gave him twelve and a half annas. He told his wife the mystery of his life after supper. That day, he stated, a major load from his life was lifted. He was so certain that he had assassinated Guru Nayak. As a result, the astrologer had fled his own village for fear of being accused of murder. He married, resided in Malgudi, and said that he would never return to his hometown. Guru Nayak's assassin was none other than the astrologer himself. So, despite knowing very little about astrology, he was able to make accurate predictions about him. The astrologer admitted to his wife that he used to hang around with Guru Nayak in his youth. One day, he drank, gambled, and fought a lot. During that struggle, he came dangerously close to killing Guru Nayak.