Gaming As A Career In Nepal: Everything You Need To Know About

We cover all you need to know about gaming as a career in Nepal in this post.

YoSin Blog - Gaming As A Career In Nepal: Everything You Need To Know About

Playing online games is something that everyone enjoys. It has grown in popularity as a viable career choice for individuals who like competitive gaming. Every year, all of the biggest online games, like Pubg, FreeFire, and Clash of Clans, hold their own gaming competitions throughout the world. People have discovered a new source of money, not only as gamers but also as broadcasters. We are seeing significant growth in the video game sector in Nepal as well. Many people have begun their careers and succeeded in the game industry as a result of this. We cover all you need to know about gaming as a career in Nepal in this post.
Table of Content (toc) 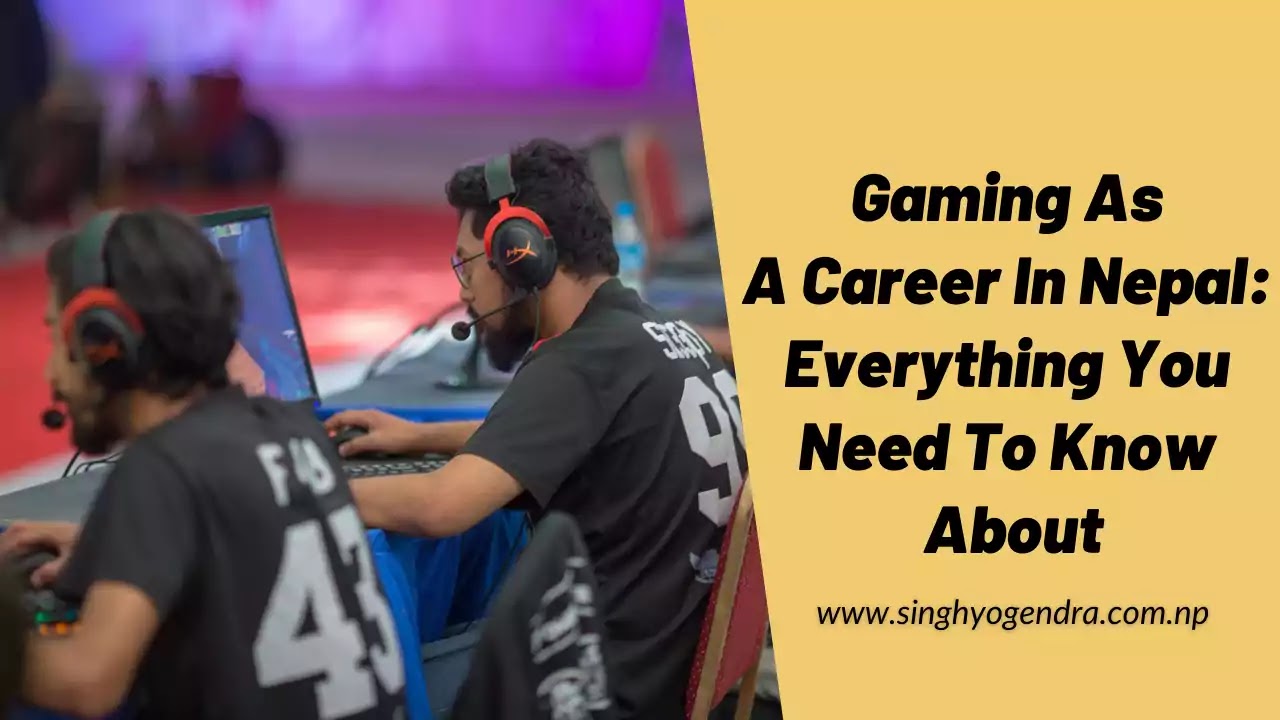 Why Should You Pursue A Career In Gaming?

Gaming is, after all, enjoyable. That is the most compelling argument to choose gaming as a profession. Imagine being paid to perform something you genuinely like. For many young people, earning money while playing video games is the ultimate goal. It is not only enjoyable to work in this sector, but it is also one of the best-paid jobs available today. Gamers compete for a prize pool that ranges from tens of thousands to millions of rupees. To win, all you need is a keen interest, some skill, and a willingness to work hard.

In recent years, the Nepali gaming sector has experienced a record number of gamers. The number of smartphone gamers has risen as smartphone accessibility in rural and urban regions has increased due to inexpensive and cost-effective technological solutions. As a result, the gaming industry in Nepal is projected to grow in the future years. In the future, it will almost certainly offer more employment and possibilities for gamers.

Shoutcaster is a term used in the Esports community to describe the commentator or voice-over. As the number of Esports events grows, so does the demand for shoutcasters or hosts. An eSports caster's job is to keep viewers informed about what's going on in the game while also entertaining them by making it appear exciting and frenetic. Shoutcasting, on the other hand, requires in-depth knowledge of the game and teams.

As a Gamer in the Profession

You may have heard the phrase PRO player if you are an enthusiastic gamer. The phrase "pro gamer" refers to a gamer who works for a living. These are individuals or teams of players who compete in competitive Esports tournaments. Instead of focusing on several games, most professional gamers concentrate on one and enhance their talents in one game.

As an Esports Organization Manager

You're in charge of the team's and company's operations. It is not a simple profession, since managing a team or organization needs true dedication and hard effort. The ethos of the company, branding, marketing, hiring, staffing, directing, selecting which games to enter in tournaments, partnering, accounting, business strategies, paying salaries, and so on are some of the responsibilities of the Esports organization manager.

Any sports team or person who does not have a coach will struggle to succeed. Online esports, like outdoor sports, require instructors to improve performance. In order to progress, an eSports coach inspires his or her team, analyzes strengths and weaknesses, and develops tactics. In the realm of esports, the coach must have extensive knowledge of certain games, as well as managerial, teaching, and communication abilities.

If none of the aforementioned options appeal to you, you can pursue a career in gaming as a content creator or streamer. Esports match reports, interviews, and news items are shared by a content developer. Material providers should concentrate on producing high-quality content that offers value to their target consumers. Similarly, for the enjoyment of their audience, one can stream their gaming on sites such as Youtube and Twitch.

Many Nepali eSports teams have been competing in international tournaments in recent days, according to reports. DRS Gaming, a Nepali PUBG Mobile squad, has been invited to compete in the world's largest PUBG Mobile event of the season, the PUBG Mobile World Invitational. When you hear that they would receive Rs. 5 lakhs merely for participating, it may seem incredible. They will, however, get a monetary reward of up to Rs. 35 crores if they win the event.

Similarly, 4K Gaming Nepal, a well-known game broadcaster in Nepal, has almost a million subscribers on his YouTube channel. Pawan Shahi, alias 4K Gaming, has been formally approved as a Facebook Gaming Partner. He has a large and adoring fan following that watch his gaming with great passion thanks to his game streams. I feel he is an excellent example of what can be accomplished by pursuing an internet gaming profession, especially in a tiny nation like Nepal.

In general, professional gaming is not everyone's cup of tea as a job. To succeed in this sector, you must put in a lot of effort, drive, and perseverance. However, if you are truly talented and enthusiastic about gaming, the gaming sector may provide you with wealth while doing what you enjoy. Only if you have a strong desire to play games and are prepared to put in a lot of effort should you pursue gaming as a profession in Nepal.

FAQ - Gaming As A Career In Nepal

Can gaming be a career in Nepal ?
Gaming is a highly competitive industry that requires experts that can mix creativity, enjoyment, and technology. Creativity and enthusiasm are the most crucial qualities in this industry. You can also pursue a Career in Gaming.

Is gaming a waste of time in Nepal?
Online video games are also a waste of time and may be dangerous since they take precedence over real life, causing difficulties not only for the user but also for others around him. The only thing that counts is that you don't squander time when you love wasting time, which you obviously do.