The Oval Portrait's main theme is narcissism. The painter is so obsessed with his own work that he entirely disregards his model's well-being.

The Oval Portrait (1842) by Edgar Allan Poe is one of his shorter tales. In only a few pages, the narrator recounts a compelling narrative about the link between art and life through his meeting with an oval picture of a young lady in an Apennine chateau. Poe's narrative deserves closer consideration because of the way he presents it as a subtle remark on the link between life and art.

With his valet or manservant, Pedro, the injured and delusional narrator has taken sanctuary in an old manor. He retires to one of the rooms, where he ponders the weird paintings that adorn the walls and reads a tiny book on the paintings that he found on the bed's pillow. Around midnight, he adjusts the room's candelabrum, and his eyes is pulled to a photograph of a young lady on the threshold of womanhood in an oval-shaped frame. This lifelike painting captivates the narrator at first, but he is quickly repelled by it. 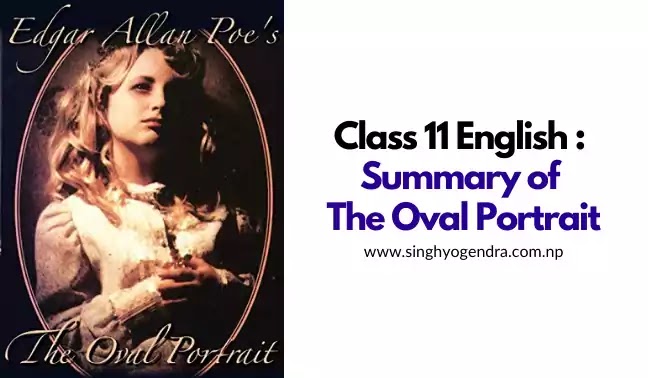 He takes out the book and reads the entry on the history of the oval portrait. The woman represented in it was the painter's young bride, and she was a wonderful wife in every aspect - except for the fact that she was envious of her husband's work, which diverted his attention away from her. The artist draws a picture of his wife and gets fascinated with capturing her resemblance, to the point that he spends all of his time starring at the image and very little time glancing at her. As he stops paying attention to her and Poe-oval-portrait-illustration becomes increasingly concerned with the painting, she becomes weaker and weaker, despondent at losing her husband's affection. When he turns to look at his wife after nearly finishing the portrait, he learns that she has died.


The way Edgar Allan Poe illustrates a primary theme that the story examines and analyzes is what sets his stories apart from other captivating Gothic horror tales or frightening novels. The narrative of the young bride and the oval picture her artist-husband paints of her is a perfect illustration of this: it's obviously a story about the uncomfortable relationship between life and art, as symbolized by the young bride and the oval image her artist-husband paints of her. However, determining exactly what the narrative is saying about the relationship between life and art is more difficult.


Given the story's conclusion – when the bride dies, ironically just as her husband finishes her painting, exclaiming, 'This is really Life itself!' - it is feasible to interpret 'The Oval Portrait' as a warning against the perils of neglecting reality in the quest of great art. When the artist loses sight of reality – symbolized in the narrative by his loyal, but fragile, wife – and gets absorbed in art itself, he makes a deadly mistake.

Alternatively, we may see the narrative as a straightforward investigation of how things are rather than a "moralizing" fable. In this interpretation, the narrative is meant to be taken as a statement about the nature of creation, rather than a warning tale about the risks of putting art over life. After all, the oval portrait is an artistic achievement - the narrator's attention is drawn to it amid the other paintings because of its lifelike quality and the artist's victory in capturing the live spirit of his subject.