The Selfish Giant is a story about love and selflessness. We, too, experience a shift in our hearts after reading the narrative.

We'll look at the summary of The Selfish Giant in this article. "Oscar Wilde" is the author of this lesson. The story's message is one of coexistence and spreading love. It's the story of a young guy who was both a divine messenger and a ruthless behemoth. The giant forbade youngsters from playing in his garden. As a result, winter was constantly present in his garden.

He realized he was being selfish after seeing this young man. As a result, he let the kids play in his garden as well as with them. After a few years, the colossus began to deteriorate. This young man appeared at that precise time and whisked him away to heaven. 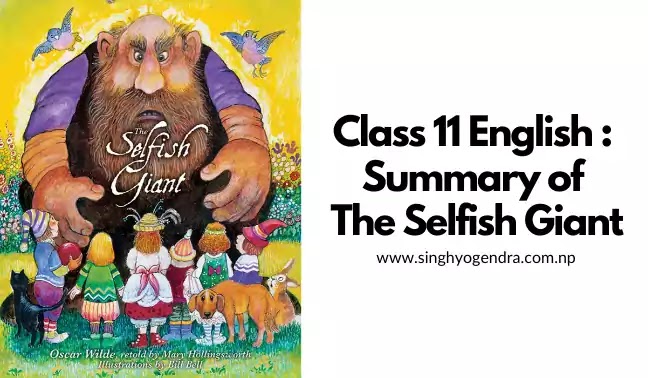 Every afternoon after school, the children play in the Giant's garden, which begins the narrative. The garden was lovely, with lots of soft grass and fruit trees. The trees produced much fruit, and the birds who sat on them sang pleasantly.

After seven years, the giant reappeared. He was staying with his Cornish Ogre buddy. The kids were terrified to see him. When he observed the kids playing, he claimed he wouldn't let anybody else play in his garden since it was his. He erected a wall around it as well as a bulletin board. "Intruders will be prosecuted," said a notice on the bulletin board. The kids were sad since they didn't have anywhere else to play. They'd walk around the high garden walls, remembering the lovely garden within.

The spring season had arrived, and there were flowers and little birds in abundance. However, it was winter in the giant's garden, and frost and snow were present. The birds did not sing in the absence of children. The grass once sprouted a flower, but when he saw the bulletin board, he fell asleep again. Then came the hailstorm and the north wind. The golden autumn fruits did not reach the giant's garden due to his selfishness.

The giant then heard lovely and exquisite music one morning. Outside his window, he heard a squirrel singing. He could sense spring when the hail and north wind ceased. He noticed the kids coming into his garden via a tiny opening. The youngsters were sitting on the limbs of the trees, which were in full blossom. He also heard the birds chirp and watched them soar. Flowers had also bloomed.

Winter, though, remained in one corner, much to his astonishment. He noticed a young child standing nearby, unable to reach the tree limbs. Even if the tree dropped its branches, it was still unable to ascend.

His heart warmed as he saw this image. He realized he was truly rather self-centered. He planned to place the youngster at the top of the tree, demolish the fences, and let the kids play here indefinitely. When the children discovered it, they ran away, and the garden reverted to winter. That youngster, on the other hand, did not flee while wailing. When the giant placed it on top of the tree, it quickly bloomed. He kissed the colossus.

When the other children returned, they discovered that the giant was not malevolent. With them, spring has returned. Every afternoon, the giant used to play with the kids, but that youngster was nowhere to be seen. It weakened significantly over time.

He noticed a lovely tree with white blossoms in the nook one winter morning. The tree's limbs were golden, and the youngster stood beneath them.

The giant became furious when the boy was hurt. He informed the kid that the man who had harmed him would be killed. These were the scars of love, the youngster said. The youngster greeted the giant with a grin and invited him to his garden. Later, the youngsters discovered the giant's body behind a white-flower-draped tree.