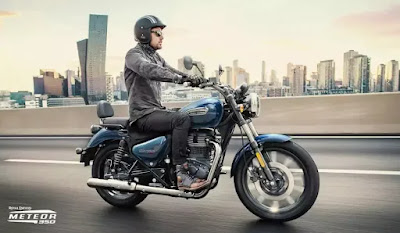 In 2020, the Meteor 350 was introduced to replace the legendary Thunderbird X. Meteor's new incarnation includes long-awaited enhancements as well as a slew of next-generation capabilities. With that in mind, let's take a look at the Royal Enfield Meteor 350 in Nepal and its major features.

Royal Enfield is a motorcycle manufacturer based in the United Meteor 350 maintains its cruiser heritage. It follows in the footsteps of the Thunderbird, which popularized the design. It does, however, improve on the previous style by including new design elements. 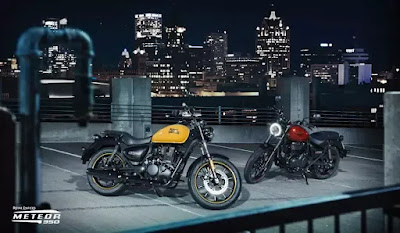 This modification enhances the motorcycle's overall attractiveness while also having a utilitarian purpose. The Meteor 350 has traditional halogen lights as well as a circular LED DRL. It also includes a new ring-type LED tail light. The gasoline tank, on the other hand, has only been minimally modified. It has a sleeker appearance and a teardrop-shaped fuel tank that is more noticeable. The Fireball, Steller, and Supernova varieties of the Royal Enfield Meteor 350 will be offered.

The new 349cc single-cylinder air-cooled SOHC EFI engine from Royal Enfield powers the Meteor 350. It has a maximum power output of 20.48PS and a maximum torque output of 27Nm at 4000rpm. It also has a 15-liter gasoline tank and is linked to a 5-speed transmission.

Meteor is getting a new J series engine that adheres to BS6 standards. The new Meteor features the most refined 350cc engine ever, in contrast to the typical Royal Enfield experience. It provides the most powerful performance while causing the least amount of vibration.

However, the fuel tank has been only slightly redesigned. It features a slimmer profile with a more prominent teardrop-shaped fuel tank. Royal Enfield Meteor 350 will be available in three variants: Fireball, Steller, and Supernova. It also has redesigned handlebar controls that are exclusive to the Meteor 350. On the other hand, it replaced the single-piece Thunderbird seat with a more comfortable split-seat arrangement. It is lower and wider than the previous configuration, allowing for more comfortable long rides.

In Nepal, the Royal Enfield Meteor will cost between Rs. 6 and Rs. 6.45 lakhs.

It will be available in seven distinct hues and three different versions. The colors, however, will be determined simply by the variant: Fireball (Yellow, Red), Steller (Blue, Red, Black), and Supernova (Blue, Red, Black) (Brown, Blue). 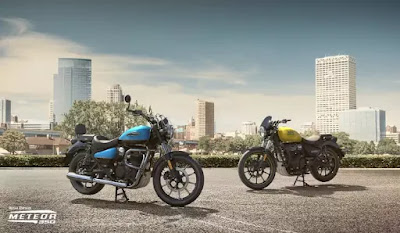 The new Honda Highness CB 350 and Jawa Perak fight against the Royal Enfield Meteor 350. Despite the fact that the Honda Highness has the most features in this class, many people believe it is too costly.

The success of the Royal Enfield Meteor is now assured by delivering fresh design, a tuned engine, and aggressive pricing. By combining all of these components, the RE cult's formula for success will be boosted even more.